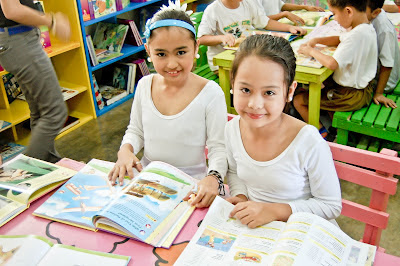 NOT EVEN the habagat rains and the floods could stop Entablado Elementary School in Cabiao, Nueva Ecija and Sto. Cristo Elementary School in San Isidro, Nueva Ecija from inaugurating their new libraries last Sept 5.
The two schools are the latest recent partner public elementary schools of the Acts of Hope for the Nation (AHON) Foundation and throughout the one-month completion period of their libraries, the school administrators, teachers and parents behind it never faltered - even when they were met repeatedly by obstacles.
It was former Mayor Sonia Lorenzo who first brought AHON’s operations to Nueva Ecija. Today, even after her term, Lorenzo continues to lend her support by endorsing AHON to the local government in the different municipalities of the region. Mayor Baby Congco from the municipality of Cabiao took on the task and paved way for the partnership between Entablado Elementary School and AHON for its 64th library. Mayor Congco hopes the new AHON library will become a source of pride for the school.
As the ribbon was cut, and the library was declared officially open, pupils excitedly filed in and wasted no time in getting their hands on the new books in their library.
NEW LIB INSPIRES KIDS TO READ
With originally only a few shelves worth of dilapidated and outdated books, Petronilla Mangulabnan, principal of Entablado Elementary School wanted to create an entirely new library that would encourage pupils to read. The new library of Entablado Elementary School boasts of a large mural, as well as colorful shelves, tables, and chairs. In addition, they also added a comfortable reading corner with colorful wall décors where students are reminded to properly care for the books in their new library.
Sto. Cristo Elementary School in San Isidro had been in need of a new library. Today, through the efforts of barangay captain Ramon Santos and school principal Maria Corazon Balajadia, they were able to get one. Sto. Cristo’s library is the 65th of AHON Foundation, which donated half a million pesos worth of books.
The story behind Sto. Cristo’s library is inspiring and tells of a community that worked together to achieve a common goal for the betterment of their barangay’s elementary school. Sto. Cristo was flooded after the strong rains but the library was completed on the agreed date because everyone — teachers, students and their parents — were there to help.
When AHON Foundation’s executive director Harvey Keh announced that AHON promises to replace books if these fall apart due to how often they are used by children, a loud applause broke out. “Perhaps, the best way to say thank you is to use the books and to read them,” Keh enjoined the students.
AHON Foundation is the corporate social responsibility arm of Filway Marketing Inc. To date it has developed 65 public elementary school libraries which has benefitted more than 130,000 students throughout the country.
To know more, visit www.ahonfoundation.org. Like us on Facebook (https://www.facebook.com/ahonfoundation) for up-to-date news on our projects and how you can help. For more information call (+632) 4331440 or email ahonfoundation@gmail.com.
View on the Manila Bulletin Website.
AHON Foundation would like to give our heartfelt thanks to the Manila Bulletin for featuring us in the Sunday edition of their paper. Your support helps us advocate our cause far and wide, and we are very, very grateful! :-)
Visit www.ahonfoundation.org
http://www.filway.com.ph
Like us on Facebook. Follow us on Twitter
Tweet
Posted by AHON Foundation at 8:08 AM