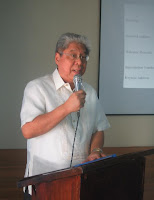 Mr. Chito Tagaysay, Chairman of the Board at AHON Foundation was recently featured in an article by Emil Jurado at Manila Standard Today. You may click on the link to see the article:
http://www.manilastandardtoday.com/?page=emilJurado_july31_2007
Or read an excerpt from the article found below =)

Little Things Spell The Difference
Manila Standard Today (July 31,2007)
Emil Jurado
***
Every now and then I come across people who live the Ignatian Prayer for Generosity, which says "Dearest Lord, teach me to the generous, teach me to serve you as your deserve; to give and not to count the cost…" These peoples, in their own little way, make a real difference.
One such person is Hector Tagaysay, president and chief executive of Marketing Inc., exclusive Philippine distributor of Time-life books. He founded Filway with Lewis Edwards in 1976 with the mission of being a partner of the Philippine government in pursing quality education for the Filipino youth.
If you haven't heard, much less read of Tagaysay, it is because if he prefers to be low profile. In fact, it took a lot of convincing on my part to get him to agree that I should write about him.
Since Tagaysay's brand of leadership has always been rooted in serving the intellectual needs of the youth, he is now actively involved in two advocacies, both geared toward the improvement of the quality of education in the country. He is currently the chairman of Ahon Foundation and the Ateneo Scholarship Foundation.
Ahon stands for Acts of Hope for the Nation. The foundation is the corporate social responsibility arm of his company. It is a non-profit organization that he founded in May 2006 with Hervey Keh, director for Youth Leadership of Entrepreneurship of the Ateneo School of Government.
Its mission is to increase literacy and build a culture of reading and learning among public school children. It seeks to empower communities by developing adequate public school libraries.
***
Tagaysay says his advocacy tries to respond to the growing problem in the public school system today.
Statistics show that less than 10 percent of public elementary schools have functional libraries. This means most schools have no adequate number of up-to-date books and reference materials that can be used by their students.
Thus, it is not surprising for former Education Undersecretary Juan Miguel Luz to say that more than 20 percent of our public high school students are diagnosed to be "non-readers." Filway resolves to share the fruits of its success to underprivileged but deserving public school children nationwide—through the gift of books.
The key concept of Ahon's programs is community empowerment. The foundation does not promote dole-outs; it believes that the community will value the library more if people become a major part of its development. 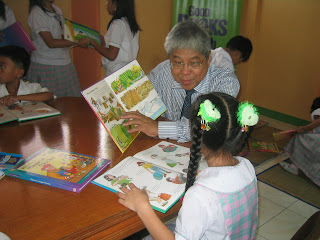 Ahon pushes for a strong cooperation among the different stakeholders (parents, teachers, students, local governments, and volunteers) of the community. Coming together, they should identify needs, divide roles and responsibilities, and work toward making the libraries functional. Ahon serves as a catalyst for the community members to realize their potential.
For the record, since May 2006, Ahon has adopted four public elementary libraries in Marikina City: Industrial Valley (launched Aug. 9, 2006), Conception (launched Nov. 14, 2006), Malanday (launched Feb. 26) and San Roque (launched April 18). The foundation has also donated books to help in the rehabilitation of libraries in Albay devastated by Typhoon Milenyo, and to Island Works Society and non-government organization helping school in Samar.
***
Together with KIDS Foundation and Campaigns and Grey, one of the biggest advertising agencies in the country, Ahon will be launching a big campaign this year entitled "Isang Milyong Aklat, Isang Milyong Pangarap," a national book drive that aims to raise one million books in a year. These books will go to selected beneficiaries in different parts of the country, especially in depressed areas.
Tagaysay has also been the chairman of the board of trustees of the Ateneo Scholarship Foundation since 1999. This foundation grants scholarship to bright but financially challenged students to study at the Ateneo. He is also an active proponent of the new student dormitory to be within the Ateneo campus.

Indeed, in making a difference, it's the little things that matter.
Tweet
Posted by AHON Foundation at 12:19 PM