Hi! :) AHON Foundation was recently featured by the Philippine Center for Investigative Journalism (PCIJ), here's the link to the site:

Or you may read the article below:

LIBRARIES OF HOPE
THE SHELVES are filled with new books, and there are colorful tables and chairs ready for readers. There is even a storytelling nook strewn with mats and pillows for those who would rather stretch out 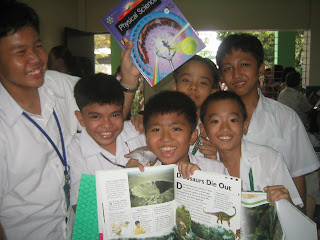 as they flip through the pages of their favorite books or while listening to tales being read aloud to them. On one wall is a mural that livens up the room all the more, while children's artworks are proudly displayed on another.

It's hard to believe this is a public school library, but if Harvey Keh and Hector Tagaysay had their way, the reading room that is now one of the favorite haunts of the students of the Industrial Valley Elementary School (IVES) in Marikina would be replicated in all of the country's 37, 161 public elementary schools. After all, Keh and Tagaysay aim to ultimately "uplift the lives of Filipino youths by providing relevant learning opportunities." That's why in May 2006, they set up AHON Foundation, which seeks to develop public elementary libraries by donating books and reference materials, as well as mobilizing community participation in putting up functional, well-maintained, and child-friendly libraries nationwide.

"Reading," Education Secretary Jesli Lapus has said, "is a foundational skill that enables a child access to the world of information. More than just teaching children to read, it is absolutely crucial to impress on them the habit of reading."In order to inculcate the habit, access to reading materials is crucial. Public schools are thus mandated by the Department of Education to have a library or reading corner. But DepEd library hub project officer Beverly Gonda admits that what passes for libraries in most public schools usually have donated books that contain obsolete data.

Addressing the country's educational woes is primarily a governmental function. But sometimes, when the government falters, civic-minded organizations like AHON step up to the plate and fill in the gaps to provide much needed educational services.

AHON's first beneficiary was IVES. The foundation has since had three more, all of them also Marikina public schools. AHON — which stands for Acts of Hope for the Nation — works with DepEd in choosing the school-beneficiaries. "We believe that if you really want to change the educational system in the country, you have to work with DepEd," explains Keh. Once a school is picked, AHON asks the principal to pledge support, in terms of community mobilization, in exchange for the books.

If Keh's name sounds familiar, that's because earlier this year, he made a list of reasons why someone like him would leave the country. He emailed the list to several friends, but it somehow circulated even outside his network, and eventually attracted media interest.

For years, though, he was the executive director of Pathways to Higher Education at the Ateneo de Manila University, his alma mater. He was in fact a co-founder of Pathways, an educational program that sends impoverished high school students to college.

Tagaysay, meanwhile, is the president and chief executive officer of Filway Marketing, Inc., which has been in the book business since 1975 and is the exclusive Philippine distributor of the Time Life home-learning programs. Also an Atenean, Tagaysay had been an ardent Pathways supporter. When Keh left the program, it seemed natural for him to team up with philanthropist Tagaysay for yet another youth-oriented project. Since Keh's advocacy is education and Tagaysay's line of business is books, refurbishing libraries was the most logical undertaking.

"I don't believe that computers can teach a child how to read," says Keh. "The basic skills of reading always begin with books. Even (Microsoft founder) Bill Gates has said that."

AHON does not merely donate books. The foundation has laid out a solid program of building libraries that is not based on doleouts. "You can give books, but if the library is not conducive to learning and to reading, sayang ang books mo (your books will go to waste)," says Keh.

Three main characteristics set AHON apart from other reading programs in the country: one, the foundation works with, not independent of, DepEd; two, it enlists the help of the local government as a partner; and three, it encourages participation from stakeholders by mobilizing the community to contribute.

Community participation is integral in the foundation's program. AHON does not deliver the books until the structure that will house them are set in place. This means, for example, that the local government has provided tables and chairs, the parent-teacher's association has painted the walls, and the barangay has installed the lighting fixtures. Then, and only then, will the new books — worth at least P500,000 — be delivered.

The community, having thus invested time and energy in putting up the library, has a stake in its maintenance. "The community has worked hard for it, so they would value the library more," adds Keh.

In fact, AHON's second beneficiary, Concepcion Elementary School, was chosen because the president of the parent-teacher's association learned about the program and wrote the Foundation. When AHON representatives visited the community, the residents welcomed them with open arms. Now the school has a new library, through the help of Filway Marketing, Adarna House, Tahanan Pacific Inc., and ABS-CBN Foundation.

Keh says the children's excitement over the books is always something to behold. "You can see the look on their faces," he says, "some of them would smell the books, taking everything in." — Lala Ordenes-Cascolan
Source: www.pcij.org
Tweet
Posted by AHON Foundation at 3:12 PM

I have learned about Ahon in Transit. I am interested to help by participating in your activities.