In her speech, Mayor Fernando motivated the community to rise above poverty and ignorance by supporting initiatives on education such as this library. “There is indeed hope for transformation,” she said. 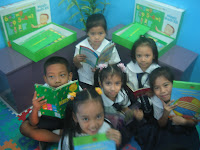 AHON Chairman Hector O. Tagaysay and Executive Director Harvey S. Keh also delivered inspirational messages. They both stressed the value of a good education that can only be achieved with the cooperation of the school, local government, private sector, and the community. Keh also lauded the City of Marikina in its efforts to come up with relevant projects contributing to the progress of the city and well being of the citizens. He added, “ While Marikina is striving to be a Little Singapore, I think Singapore should be the one to learn from Marikina. We have done so much progress with very limited resources. Marikenos are meant to conquer the world.”

Guests at the event were also greeted with a lively performance by the Malanday ES Drum and Lyre. Cultural dances by Grades 4 and 5 pupils also added color and fun to the ceremony.

With the success of the launch, AHON looks to the future with great optimism as it continues to be encouraged seeing public school students excel inspite of the many daily challenges they face.